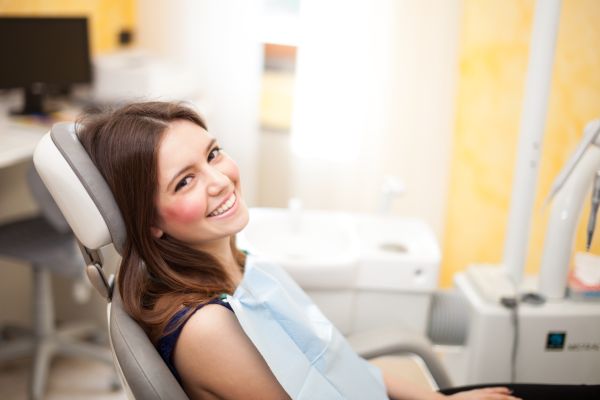 A TMJ dentist focuses on treating temporomandibular joint disorder. Temporomandibular joint disorder, or TMJ disorder, is a condition that occurs when the socket that connects your lower jaw and skull is misaligned or out of place. TMJ disorder is known to be commonly associated with constant headaches, migraines, ringing in the ears, teeth grinding and jaw pain. Despite a lack of scientific research conducted on the issue, women are more likely to develop TMJ compared to men.

Scientists have done some research on the estrogen receptors in the brain as well as jaw tissue. Scientists believe that estrogen in women can cause additional strain on the brain, thus causing the brain to lack the proper ability to navigate or control pain in female TMJ sufferers. Progesterone, a hormone that has been negatively associated with the growth of bone, cartilage and certain proteins in the body, has also been at the forefront of scientists' research agenda.

Women who are pregnant will often have lowered vitamin levels due to having to supply for two. Researchers have suggested that this lack of vitamins, such as a deficiency in magnesium, can cause issues related to TMJ. Women tend to also be extremely stressed and fatigued while pregnant. This means that they are more likely to clench their jaw or grind their teeth. This does nothing but worsen the issue at hand.

Stress can also negatively affect a female’s hormone balance. This decreases their ability to get a good night's rest. When you fail to sleep, the body cannot produce the proper amounts of dopamine and essential vitamins into the bloodstream. This further worsens the cycle of vitamin deficiency and stress. A TMJ dentist will be able to properly examine the exact issue at hand.

The anatomy between a male and a female’s jaw can vary. Female jaw muscles are more prone to injury and increased levels of inflammation and exhaustion. As a result, women tend to receive less blood and less oxygen to their faces: their jaws in particular. When you lack the proper amount of oxygen and blood, your muscles begin to produce additional amounts of lactic acid. Increased levels of lactic acid generally lead to cramping, spasms and pain. A lack of blood means less circulation to the brain. This causes constant headaches and migraines associated with TMJ.

Sleep apnea or lack of sleep

When someone is anxious or depressed, they tend not to eat. When they fail to eat, they tend to lack the proper vitamins to grow and heal. When you lack essential nutrients, you restrict your blood flow and oxygen levels, thus causing TMJ.

TMJ a vicious cycle that unfortunately eats away at more women than men. Contact a TMJ dentist as soon as possible if you believe you are suffering from TMJ.

Check out what others are saying about our dental services on Yelp: TMJ Dentist.

Can My General Dentist Help Me With TMJ Pain?

Wanting your general dentist to help you experience less TMJ pain? Some of the more common symptoms associated with temporomandibular joint disorder include a clicking of the jaw, headaches, earaches, pain when opening the mouth …

TMJ pain makes it difficult for people who are affected to speak and eat.Fortunately, the condition, which affects over three million people, can be treated.What is TMJ?The temporomandibular joint is a joint that acts like …

If you or anyone you know has been having sleepless nights as a result of chronic jaw pain, it could be that they are suffering from Temporomandibular Joint (TMJ) disorder. Symptoms include difficulty chewing foods …

How Is TMJ Treated?

TMJ stands for temporomandibular joint disorder, which for the most part means that someone's jaw is out of alignment. When a jaw is not in its proper alignment there are going to be repercussions, which …

Due to the executive order by Governor Greg Abbott, we will be temporarily closed until April 22,2020 The safety and well being of our patient continues to be our primary concern.